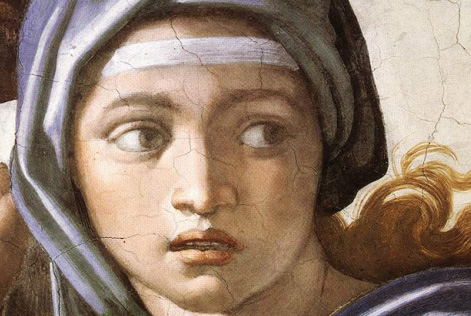 In T.S. Eliot’s epic poem “the Wasteland” which is rife with recollections of youth & anticipatory images of death, the narrator begins with a quote from Petronius’s fictional work Satyricon. The character Trimalchio comes upon the mythic Cumaean Sibyl who had asked a God to live forever, but forgot to ask for perpetual youth. She achieved immortality but at the price of the deterioration of her body into dust with only her voice still intact. When Trimalchio asks the Sybil, who is in a jar hanging from a tree limb, ‘what do you want?’ she responds ‘I want to die’.

Dr. Atul Gawande‘s new book Being Mortal: Medicine and What Matters in the End is characteristically perceptive and engagingly written and caused me to remember this tragic scene from “the Wasteland”. Dr. Gawande writes that increasingly many physicians strive to stretch out patients’ terminal illnesses to longer slower declines. Ultimately it seems to me that many are stretched to the point where, like the Sibyl, patients have voices but are otherwise unable to function without substantial limitations, which are associated with health care burden and care that is costly to patients and their families as well as the US as a whole. While their bodies fortunately have not turned to dust, patients may be functionally bereft (as if dust) and those on ventilators even lack the Sibyl’s ability to speak.

Dr. Gawande’s book also reminded me why I went into oncology in the first place. I wanted to provide patients with the kind of privileged “low intensity” care at the end of life that my grandparents had received. As we struggle with policy issues, we should perhaps look at the manner in which nurses and physicians approach end of life care in their parents and for themselves. My guess is that this would ignite a sea change, one which might remedy the current state of affairs which has been judged by the Institute of Medicine to be an inadequate paradigm of death in America.

By way of example, in the late spring in the early 1970s, my widower grandfather telephoned my father (an oncologist) that he had developed a bloody cough. My father immediately brought him to our home in Ohio and he was seen the next day by our neighbor, a PCP at the hospital where my father practiced. I later learned that our PCP neighbor took a thorough history through which he ascertained a 100 pack year history of unfiltered Camel cigarettes and a 20 pound weight loss in addition to the hemoptysis. His physical exam which revealed distant breath sounds throughout and a markedly enlarged liver. A plain film of the chest showed marked mediastinal lymphadenopathy without a clear dominant lesion and sputum cytology contained small round cells consistent with small cell lung cancer. He very likely had extensive stage small cell lung cancer and his performance status was poor. He started radiation to the chest to prevent exsanguination, but he was so tired and it upset his stomach so after a couple fractions he told my father he did not want to go back for the subsequent treatments, which my father agreed was fine.

My mother, a medical surgical nurse on hiatus raising small children (me and my brother), provided compassionate nursing care for my grandfather daily on his terms. He refused some of her recommended interventions. For example he did not want her bathing him. My folks hired a private duty nurse to bath him and change his sacral dressing. Despite that, my mother spent a good deal of time caring for him and sitting and talking with him; he spoke about his grief surrounding his mother’s untimely death when he was eight and how he was sent to a “horribly cruel” boarding school with his brother. My father’s two siblings and their families each came for a week when we went on our usual two-week vacation that summer, giving my folks a break and allowing them to say good bye.

One night in the fall, the four of us were watching TV down stairs and my father kept going up stairs to check on my grandfather. It turns out that he was becoming increasingly short of breath. I later learned that my father was giving him small doses of morphine to relieve what I now would describe as “air hunger”. Before bed, my father came in my room, picked me up and said “let’s go say bye bye to grandpa”. I waived at the edge of the doorway to my sleeping unresponsive grandfather and said “bye bye”. Soon our PCP neighbor was in my grandfather’s room with the door closed. I imagine the end came swiftly with the next bout of dyspnea and I expect peacefully.

My grandfather had lived with us for about four months before developing such substantial dyspnea that he required a dose of morphine that was large enough to stop the air hunger but also had the unintended consequences of stopping his drive to breath. This is called the “double-effect “and should not be conflated with “mercy killing” where the primary goal is to end life not to relieve a symptom of suffering.

Many of us wish our parents and our patients could live forever, but none of us will live forever as we are mortal. At this moment in time, the biggest challenge in caring for patients at the end of life is medicine itself. Medicine will continue to advance and what senior teaching physicians need to embrace and then model for trainees is compassionate restraint when patients are at the end of life. Stated another way, for these patients we must continually ask of each medical intervention, will this care result in “kind medicine” or perhaps instead medicine that is technically feasible but untempered by compassion & agnostic to patient prognosis? This approach to patient care might well be met with choruses of anti-paternalism from trainees and other attending physicians who might say things like “who are you to play God”, “let the patient decide or their proxy decide, we espouse patient autonomy” .

If asked this on rounds, I would respond by asking why is it that at the end of a patient’s life we develop moral unease regarding clinical decision-making? Prior to the end of life we make all kinds of care decisions for patients without involving them from what mattress to order to arrest breakdown of sacral skin, to what antibiotics to use, to what labs to obtain and at what intervals. Why is that? Because they don’t know. They did not go to medical school, they are putting their trust in us as physicians to make the correct decisions. Why now at the end of life when the stakes are highest, do we suddenly take a very measured step backward, figuratively cover our eyes and ears, stop making decisions, and instead push these most critical decisions onto perhaps the least informed folks in the hospital: the patients, their spouses &/or their children – who understandably lack knowledge of what “breathing machines, CPR, vasopressors” are like or the expected morbidity to survival ratio associated with them in end-stage cancer? Shame on us. What’s wrong with sitting down and compassionately relaying to patients and their families that the end of life is approaching and we will focus on ensuring that the patient feels as good as they can for as long as they can? This means aggressive symptom management and avoidance of therapies that will increase suffering without hope of improving remaining time?